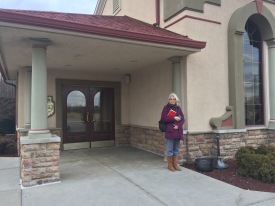 After my son died I began journaling. I lost a son and gained a grandson. I had a story to tell of hope and recovery restored and becoming a mother again. I thought if I write a book it will be called The Summer of Paintless Toenails because I didn’t feel like getting my nails done after the flip-flops came out. I’m not an author, how can I write a book?  That was a little scary. I felt led by God to start writing events and feelings after Zachary died. Like journaling this helped sort out what I was going through and gave peace and solutions at times. I focused on how getting through might help someone else when their world was turned upside down.

Many times I got caught up in daily do’s. Putting one foot in front of the other to get done what needed to be done. Could I write a book? Not so sure. My husband Sam was a writer, I knew he could help. Then began a glimmer of hope that yes we can do this, I believe I felt an encouragement from God and His Favor to tackle it, then I got excited about the prospect.

Funny I never felt like I was a public speaker, but I really was. Forty years as a nurse, I spoke with patients, their families, physicians, and other departments with confidence and compassion. Now I feel a passion for other grandmothers, especially those raising grandkids, and for people going through grief. Maybe I could help them and make a difference in their lives. People need hope in this journey we are on with all it’s twists and turns. Speaking is an aspect of my life now. The book launch is April, 29th,2017 at Pastarrific Sophia banquet room. I anticipate this new season with much delight, for God’s presence goes with us.

I am on an adventure with Jesus. More books, blogs, and speaking are ahead with my husband. I view them now as an opportunity, not baggage to weigh me down. Baggage includes doubt and fear. So I’m carrying the right luggage of faith,on my voyage to lift me up and make it all easier! To quote Jean-Luc, Engage!

Let us know your awesome adventure you are on, for we all have an interesting story.